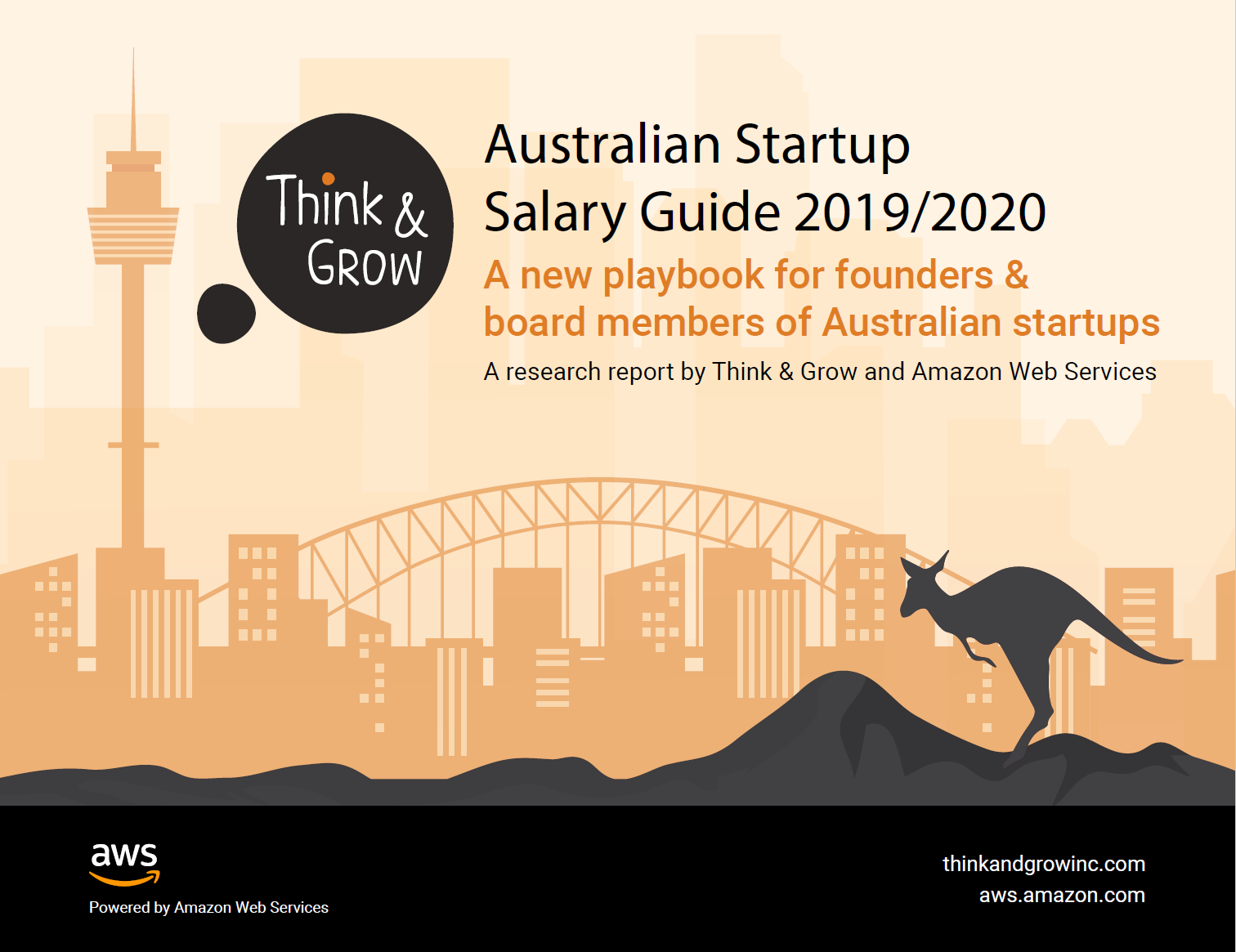 The last few years have been momentous for the Australian startup sector. We have seen Canva grow to a valuation of $3.2 billion, Atlassian go from strength to strength on the NASDAQ, and the emergence of a number of category-defining businesses on the ASX in Zip and Afterpay. Beneath these headline-grabbing moments, some exciting things occurring across businesses not yet making headlines. The question we continue to ponder is: what is the relationship between talent and business growth?

To begin to answer this question, we must consider the remuneration packages of startup roles in Australia and see how they might differ to startup hubs around the world.

2019 and 2020 mark the second year of our salary guide and this year we have tried to make it better than ever. We have increased the number of available data points from 500 to nearly 1000 across 63 businesses. We have also broadened the quality of our data gathering to purely focus on the outbound collection of data from founders instead of using a self-reporting online questionnaire. This has been achieved through the hard work and close support from the venture capital community and Amazon Web Services.

We based our investigation on the following questions:

The detailed Australian Startup Salary Guide can be found here.

Some of our key findings are as follows:

Of all respondents surveyed this year, 11% of roles belonged to founders, and we’ve seen confirmation that the number of founder CEOs drops as the amount of capital raised increases. Given the widespread focus on product development, we saw a bump in Chief Operating Officer (COO) hires, which allows founders to best focus on product vision and the COO to manage the day to day operations of the business.

71% of non-founder COOs were brought in once a company had raised $5 million.

Interestingly, these COO hires often act in a CEO capacity, taking responsibility for business functions. We note that more COO hires is a marker of growth and success in the Australian startup ecosystem. It shows enough businesses have reached critical mass to warrant this heavyweight hire and enable the business to push through to the next scaling phase, beyond the experience of the founder. In the early stages of a business, we’ve discovered Australian founders who raise money earlier pay themselves better, give themselves more equity and generally have more gender diverse teams.

Because founders largely act as the Product Manager, in 2019 we saw most companies between the $0-$5 million raise phase with few product roles.

Of all product hires this year, 18% were of senior leadership or management roles. Of these hires, 48% were in businesses that raised more than $10 million. Product Managers also attracted a high mean base salary of $130,689, with Chief Product Officers or Heads of Product attracting a mean salary of $180,200.

Engineers are the backbone of the tech industry. The breadth and variety of engineering skills meant that more than half of the roles analysed belonged to this group and most were from B2B businesses. The proportionately high number of engineers represents the non-stop need to push product development forward. As such, they continue to be among the most highly paid employees and in continual demand.

This group also enjoys one of the largest equity distributions, with 38.5% of engineering employees participating in company employee stock ownership plans (ESOP) and 43% negotiating additional elements to their compensation packages, such as bonuses.

In our analysis, we found only Sales employees had more access to ESOP. Interestingly, we found much fewer CTO roles hired this year, indicating Australian startups are focused on hiring engineers on staff but not necessarily in the C-suite.

That said, in companies that have raised more than $10 million, there are often two people working in the tech leadership role (if we include technical founders). In these CTO/VP/Head of Engineering roles, of which we found 32, 63% attract ESOP and 53% appear in businesses that have raised $10 million.

This year, sales roles enjoyed a total mean target pay, including a target bonus, of $139,000. In more senior roles, such as Chief Revenue Ocer/VP/Head of Sales, the mean salary was $167,800. Adding in a target bonus, which 44% of these senior people reported having, their salary bumped up to $204,600.

Bonuses were consistently a large part of the salary package, with nearly 40% of employees reporting they have a target bonus, and a similar number attracting ESOP. We found 1 in 5 employees have both bonus and ESOP as part of their salary package.

Our survey shows a pick up in the Chief Operating Officer hires in the later stages of growth. This is a broader marker of growth across the ecosystem as this hire is usually made to support the Founder/CEO in scaling. Experienced COOs bring the operational know-how in running businesses of scale, and those that have done this multiple times are incredibly valuable.

There were 21 COO/Head of Operations/Strategy roles with a mean salary of $148,250. 42% had ESOP. Generally, operational roles were heavily based in B2B companies, with only 19% found in B2C companies.

Hiring in data roles made up nearly 3.5% of all job functions we looked at during this year’s Salary Survey. There were five Head of Data roles with a mean salary of $145,600. This year’s survey found 56% of data roles were in businesses that had raised more than $50 million, yet most data roles that were also management roles were found below that cap raise.

Data scientists can be powerful additions to any growing team, as they allow for strong early-stage data architecture and can help your organisation identify what data to collect and what is unnecessary.

They can also assist in identifying new business opportunities. One such example is Safety Culture, which has pivoted towards insurance, having taken all their customer data and identified an unserviced need.

As we’ve seen consistently over time now, finance tasks are generally outsourced in early stage startups. 30% of finance roles were found in early stage businesses and they generally belonged to junior payroll and cash managers.

In fact, we found only one financial professional worked full time in businesses that were in the fledgling 0 - $1 million raise bracket.

It was once companies hit that $10 million mark where we saw a deliberate onboarding of CFOs, signalling a reprioritisation towards business and economic management.

In our experience, HR talent is generally brought on once the company raises capital and experiences some explosive growth. There’s a widespread perception that HR creates unnecessary bureaucracy, and in dynamic young businesses, it’s natural for leaders to shy away from getting bogged down in regulation.

According to our data, the HR hires in 2019 doubled, with 82% of those roles found in businesses that had raised over $10 million.

We’ve also seen a pickup in ‘Heads of’ roles, with founders recognising the importance of bringing in a more senior person to lead this function earlier to ensure the ‘people foundations’ are set up for success.

In total, there were 14 Chief People Officer/Head of People roles, with 2 attracting a bonus and 8 on ESOP. Their mean salary hovered around $158,300.

Founders, Product Managers or external third parties (like freelancers) generally take the design lead. It’s only when the pace of change outstrips the original capacity do we see designers come on board.

We saw four executive-level design roles, such as Chief Design Officer or Head of Design/UX, emerge from this year’s survey, attracting a mean salary of $176,250. Of those, 50% had ESOP and three of those roles were in businesses that had raised more than $10 million.

Many marketers are moving from traditional digital agencies into the startup ecosystem, with those experienced in SEO, SEM and social media management finding roles that offer them more autonomy and less corporate bureaucracy.

When it comes to B2B vs B2C, the marketing demands are quickly different. Those in the industry have reported B2B startups require marketers with long lead times outside the sales function, and typically use enterprise tools like Salesforce and IBM.

This year we found 50% of all roles hired by fledgling companies underneath a $3 million cap raise are senior marketing roles, indicating startups value the marketing function from the get-go.

For more information on startup salaries in Australia and our methodology, check out the Australian Startup Salary Guide here.

Think&Grow is a specialist consultancy that helps startups and mature digital businesses navigate the challenges of growth, transformation and change. Our services include executive recruitment, consulting and advisory, career coaching.

Hiring a Product Manager: Our Philosophy

Find out what they do, key skills, when you need one, and how to hire them.

What is the right “style” of engineering leader to hire for our business?

Think & Grow were asked by Dynamic Business to judge entries into their Top 10 Entrepreneur awards.

How to expand your business into Lisbon. Hear from a few experts on the benefits, plus unmissable hotspots!