Making the leap from corporate to startup with Kirstin Hunter, CPO of Brighte

An experience of career transitions and making remuneration work for you, and why banking on a company's mission can pay off 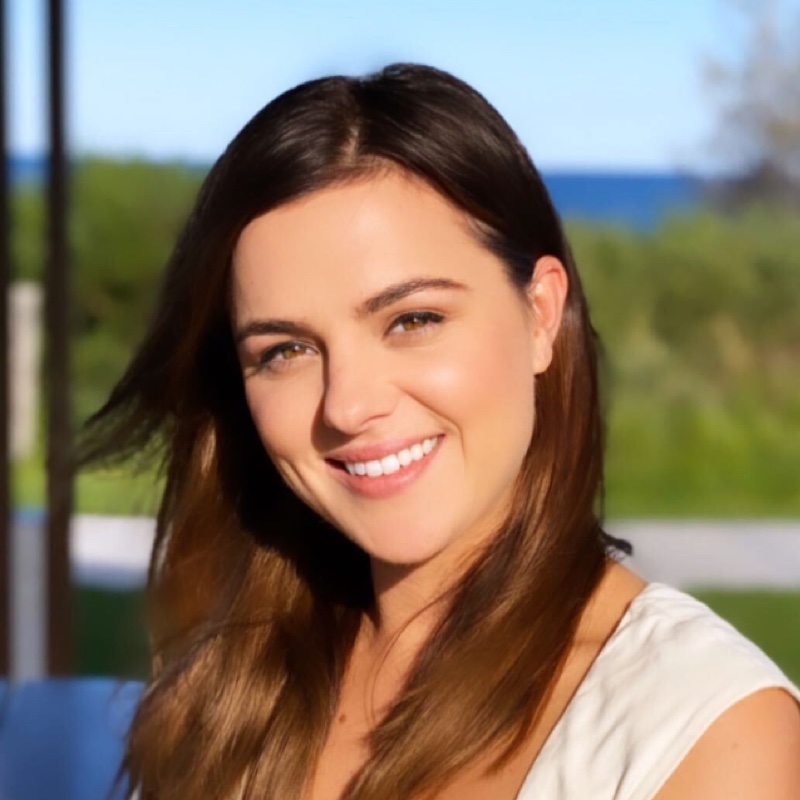 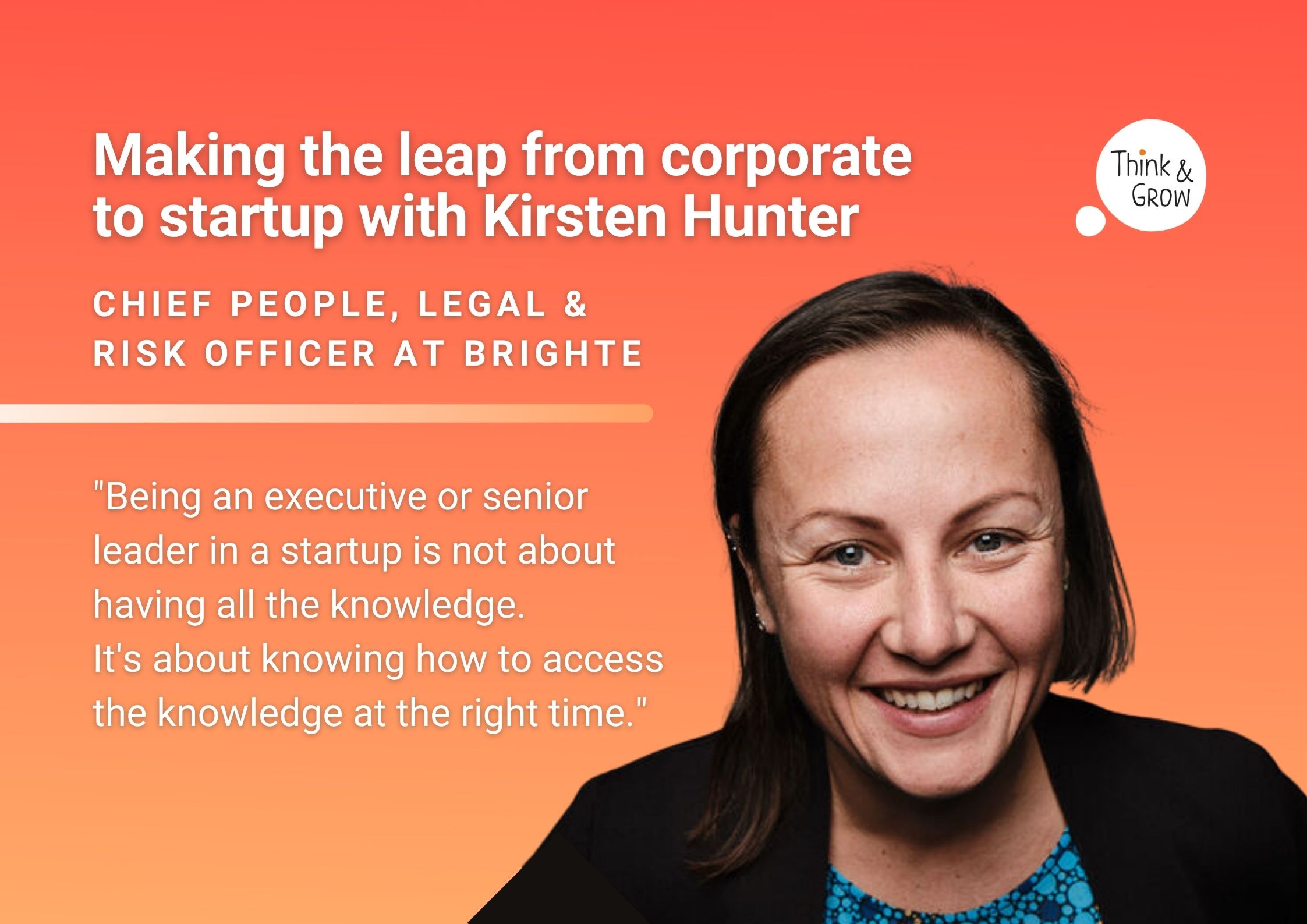 Career change can be daunting enough, but throw in transitioning from the corporate world to the startup world and it’s a whole different kind of ball game. Kirstin Hunter went from corporate lawyer to management consultant to COO and CEO of a young startup, to landing her current role of Chief People, Legal and Risk Officer at Brighte.

In this interview, she tells us about her career experience of successfully making the jump from corporate to start up, and how she made remuneration work for her along the way.

Kirsten: In terms of advice for people coming across from the corporate world, there are a few things to mention:

"Being an executive or senior leader in a startup is not about having all the knowledge. It's about knowing how to access the knowledge at the right time."

It’s different to being an executive of an ASX 50 company where they've probably done a bunch of the line roles before, they've probably seen a bunch of challenges. They’ve got people who have been in finance for 40 years in CFO roles, have a wealth of experience and they know what the answers are.

A startup CEO is there because they had a great idea and were brave enough to push it forward. It’s a different dynamic that it sets up within the business. And it takes a different kind of executive to support the CEO in a start-up. Our CFO has 15 years of banking experience at Macquarie Bank, but this is his first CFO role. As for me, I head up the legal function, but I haven’t run legal cases on every iteration of corporate law. So, my job is determining the big issues, if legal counsel should be involved, if this problem is something we can resolve right now. It’s all about being able to spot problems, and being comfortable not knowing the answer while also being hungry to find it out!

Kellie: Could you tell us about your career journey, and how you got to Brighte?

Kirsten: I started my career as a lawyer, working at Freehills. I love the theory of the law, but not the practice so much. It wasn’t what I wanted from my career. So, I moved across to Bain as a management consultant and ended up being there for six years. I was motivated by what my corporate skills could do when it’s applied to community problems. This led me to grab the opportunity to do volunteering -  my plan was to leave the corporate world behind and work at a charity. Once I had my daughter, things again changed. I had to stop volunteering due to lack of time, but I did start reading a lot more about climate change. It made me realise that all these horrific changes predicted to happen by 2040 would happen when my daughter was 26 - a young adult instead of an old woman. I’d heard about Future Super, empowering people to use their money in a way that drives a better future and I was all-in based on the purpose of the company investing in climate solutions.

I started casually consulting for them (Future Super). I'd prepare pitch decks, draft emails for them of what to cover, even turned up to some of the meetings. Doing this helped me carve a niche for myself. It was really clear to everyone that there was scope for me to do a heap of work and bring a lot of value. I converted my six month contract to a permanent role as Chief Operating Officer. My role evolved from COO to Managing Director to CEO over that time, and I also joined the board.

I was recognised as a late-stage co-founder by the two original co-founders and the board. My role being within a series B growth company entailed everything from conveying our purpose as an organisation and what that meant for our staff and customers, to how we make decisions about suppliers. After four years I transitioned away from the business and handed the CEO role back to the original co-founders.

After meeting Katherine at Brighte about a Chief People Officer role, it was originally a six month contract as they needed someone to come in and figure out how to improve our ability to recruit top talent. I’d been there around two months when changes in the executive team meant that I picked up Risk and Legal too. It became a broad internal operations role: good risk management enables good strategy planning, and good strategy takes into account the risks and opportunities. It worked together well.

Kellie: How did you make remuneration work for you during your transitions?

Kirsten: Moving from Bain to Future Super, I was getting the same amount in take-home pay, but I did give up my bonus. That was offset against the opportunity to become a shareholder through ESOP. I was all-in on the mission, I believed this thing should exist and I had the skills and energy for this problem which was going to make it successful, but I wasn’t banking on ESOP. Until I sold my shares, they represented zero value to me in my personal financial plan.

Being an owner in the business means something to me. Two things made this easier: My partner at the time was in a corporate professional services role, so our combined income was enough to make it safe for me to take that jump. I also knew that Bain would always take me back, so I had my old job in corporate to fall back on. With Future Super, I was able to get my remuneration to a level where it was close enough to the take-home. It was giving up the bonus which was the real sacrifice.

Kellie: What is your view on issuing ESOP to attract and retain talent?

Kirsten: At Brighte, we are a later stage business so it’s more important to get the right people and compensate them fairly. We don't want to narrow our talent pool to only people who are willing to take a personal hit in order to work on our mission.

That’s a real luxury of being in a bigger startup.

"In a smaller start-up, you need to find the people who are so aligned with your mission that they’re willing to take that personal hit to do it, it changes the way you find people."

It also depends on what an individual’s personal risk appetite is and stereotypically, women have a lower risk appetite than men do. Perhaps that's why we see a lot of men who are more willing to jump into startups than women. Especially around my age and experience level (speaking in averages), caring responsibilities tend to fall onto women more than men which tends to lower your personal risk appetite even further.

Most big corporations have set up their parental leave scheme with different leave allowances for “primary” and “secondary” carers, so that they encourage women to take parental leave more than men. So, you need to be working within an individual's personal risk appetite and family risk appetite. I was able to take the risk, especially as I cared so much about the mission.

Kellie: What was the mission that connected you to Future Super and Brighte?

Kirsten: Future Super existed to use the power of money to invest, advocate and campaign for a future that was worth retiring into - worthy of my daughter retiring into. Future Super is at the intersection of people, power and financial power which is a really cool thing. The superannuation system has $3 trillion in it. I also believed Future Super was a product for everybody they just didn't know yet - who would want their superannuation and retirement savings invested in the fossil fuel industry, when they could have invested in renewables? I also saw how my skills could help the business improve.

Brighte is playing in a similar space to Future Super in that it’s at the intersection of environmentalism and conscious capitalism. We provide products that bring the future forward, for example, helping families afford to put solar panels on their roof now rather than waiting until they can save up the money.

My decision to join Brighte was less of a trade-off because it’s a later-stage business. When you're bringing in your first senior people as a tiny start-up, you’ve got to look for people who are so bought in on the mission. When you're a bigger stage startup, you can pay more money, the likelihood that the ESOP is going to turn into something of value is a bit higher, so you can start to access those people who have a lower personal risk appetite.

I believe there are so many people in corporates and in tech companies who would love to use their skills for a business that's contributing to a better climate future. So, my job as Chief People Officer is finding those people and a way to empower them to make a career decision based on their personal values.

This article gives you a human element and insight into the data and findings for our Australian Startup Salary Survey Guide 2021-2022 in partnership with KPMG, Tech Council, HiBob and 20+ Australian VC's.
A big thank you to Kirsten Hunter for contributing her insights.

Want to have the first look? The guide launches 22nd November 2021. Join the waitlist to receive it directly to your inbox.

Scaling Lessons from the founder and CEO of OurCrowd, Jon Medved.

We discuss all things strategy for scaling a business, after Jon successfully built one of the worlds largest crowdfunding platforms, OurCrowd.